Spoiler: United Nations is becoming less and less relevant for each passing year. Russia is regularly abusing its veto rights in the Security Council which paves the way for war crimes and violations in human rights. By adding insult to injury, the Human Rights Council, (UNHCR), will next year include a member whose regime is committing genocide: China. Only half of the members in the UNHCR are democracies. The other half regularly violates its peoples’ civil rights.

While Rule of Law and Freedom of Speech are more or less absent in many UNHCR member states, Regime Corruption is pervasive. Are these countries really committed to uphold human rights? No, of course not. Many countries commit themselves to violate human rights. The UNHCR is a joke. A very bad joke.

United Nations has just celebrated its 75th birthday. Due to the veto rights of the permanent members of Security Council, questions about its meaningfulness have been raised. As I showed in here, Russia has used its veto power to defend violations of human rights.

Critics may have more arguments now. On the 13th of October 2020, 15 new members were elected for membership in the UNHCR. Are the representatives of these countries suitable for membership in a council for human rights? The Human Rights Council  comprise 47 States responsible for the promotion and protection of all human rights around the globe. The council has the ability to discuss all thematic human rights issues and situations that require its attention. Has the ability to clearly does not mean that the members of the council will do simply because they don’t want to. At least not all of them.

In a document on the Council’s webpage, it is stated that the Council “is the only intergovernmental organisation responding to all human rights abuses across the globe by exposing violators and demanding change”. And that “Council members commit themselves to uphold human rights.”

Let’s have a look at how committed the members are. What we’ll see will show whether this council is in fact a true Human Rights Council or whether it is a farce. I’ll begin by having a look at the 15 members who were elected this month. Half, or eight out of fifteen, countries are classified as electoral democracies by Freedom House. But this doesn’t mean that all is well in these countries. Their governments restrict the citizens’ freedom in several respects. Whether these restrictions are compatible with civil liberties, determine the classification of countries as Free, Partly Free or Not Free.

It would be strange if the overall classification of life, Freedom in the World, for a country should be deemed as Not Free for an electoral democracy. Governments in electoral democracies can nevertheless restrict the Internet access for its citizens for different reasons. Some countries are subject to disinformation campaigns from other countries, as I showed here, and may therefore restrict the access to such sources.

Whatever the reasons are for restricting the Freedom on the Net, of the new 15 members, only France and UK are free in both respects and electoral democracies, c.f. Table 1. 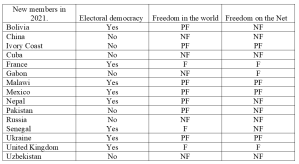 Which other countries do we find among the new members? At least three countries whose governments are notorious violators of human rights: China, Cuba and Russia. Adding Uzbekistan to these countries, we have four countries that are not electoral democracies, and which are classified as Not Free in both respects.

One of the new members in the UNHCR, Communist China, is committed to commit genocide

The communist regime in China constitute without doubt the worst human rights violator in the world. As far as I know, it is the only regime that commits genocide as a policy, c.f. Figure 1.

And Yes, it is genocide. According to the United Nations “Convention on the Prevention and Punishment of the Crime of Genocide” In Article II, genocide is defined by acts with the

Here is one of many shocking accounts of what is going on.

Having established that UN allows a member state whose regime commits genocide, let’s have a look at the other members in the UNHCR.

Only half of the members in the UNHCR are democracies

According to V-Dem, only half of the members in the UNHCR can be classified as democracies. Eight countries, including three of the new members, are closed autocracies, c.f. Figure 2.

Figure 2. Autocracies and democracies in the UN Human Rights Council 2021-2023. 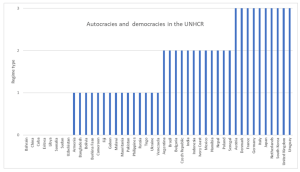 Out of the 50% of countries that are classified as democracies, twelve are categorised as electoral democracies. In such countries, free and fair multiparty elections are held but there are restrictions of but either access to justice, or transparent law enforcement, or liberal principles of respect for personal liberties, rule of law, and judicial as well as legislative constraints on the executive are not satisfied.

This leaves only ten countries left that are classified as liberal democracies where de-facto free and fair elections are held and where the above-mentioned criteria are satisfied. In liberal democracies, institutions are designed to protect the individual and her rights against the state’s oppression.

Rule of Law, Freedom of Speech and Corruption are in dire straits in many UNHRC member states

A quick look at some things which are essential in free societies reveal that people in autocracies face higher risks of being treated unfairly by their judicial systems. Since the judiciary is less independent, it is more prone to take orders from the executive when it interprets laws or makes decisions in cases between the state and individuals, or even between individuals if one of the parties belong to members of the political and economic elites in the country.

As I showed here and here, Rule of Law is absent in Russia where people courts are rigged and people don’t have access to justice. And the same applies also for the other three new members in the UNHCR which I mentioned above: China, Cuba and Uzbekistan, c.f. figure 3.

Figure 3. Type of Regime (left axis) and Rule of Law (right axis) in the UNHCR countries in 2019.

Source: Varieties of Democracy. https://www.v-dem.net/en/ Note: The Rule of Law index shows the extent to which laws are transparently, independently, predictably, impartially, and equally enforced, and to what extent the actions of government officials are compliant with the law. The indicator ranges from 0 (absence of rule of law) to 1 (high degree of rule of law).

It also applies to many authoritarian African members of the UNHCR, and Venezuela which Maduro managed to turn into a humanitarian disaster which is described here.

One would think that conditions for freedom of speech would be as bad as for Rule of law but that is not the case. Perhaps it is more difficult to control what people discuss at home and on the Internet than to make sure that the judiciary jumps when you shout “frog”. Nevertheless, freedom of expression in autocratic countries are in general more restrictive than in democracies. Especially so for the four new members mentioned above, c.f. Figure 4.

Figure 4. Type of Regime (left axis) and Freedom of expression (right axis) in the UNHCR countries in 2019.

Source: Varieties of Democracy. https://www.v-dem.net/en/ Note: The Freedom of expression shows the extent to which government respect press and media freedom, the freedom of ordinary people to discuss political matters at home and in the public sphere, as well as the freedom of academic and cultural expression. The indicator ranges from 0 (no freedom) to 1 (full freedom).

Controlling the judiciary and the media allows the political elites to use its powers and offices for private or political gains. This practice is not surprisingly more common in autocratic countries, especially in Venezuela, c.f. figure 5.

Figure 5. Type of Regime (left axis) and Regime Corruption (right axis) in the UNHCR countries in 2019.

Source: Varieties of Democracy. https://www.v-dem.net/en/ Note: The Regime Corruption indicator shows the extent to which political actors use their political offices for private or political gain. The indicator ranges from 0 (no corruption) to 1 (high corruption).