Spoiler: After the collapse of the Soviet Union, Russia granted to take the place of the Soviet Union as a permanent member of the United Nations’ Security Council. That was a mistake. The position has mostly been used to block investigations into human rights violations, Russian occupations of other countries’ territories, protect pariah regimes and block UN aid to refugees.

After Putin came to power, Russia has used its veto to prevent the UN to act against regimes who violate human rights and even persecute their own populations. The first vetoes blocked UN actions against the regimes in Myanmar and Zimbabwe. These vetoes were not based on any considerations of what was going on in the two countries. They were supporting China’s vetoes. The Chinese regime was not interested in having UN missions in countries where China had invested.

And then came the Arab Spring. And the Arab Spring reached Syria where Russia has a naval base. Arms sales to Syria and Syrian infrastructure projects added to Russia’s interest in preventing the murderer Assad from being overthrown. The Arab Spring in Syria began with peaceful demonstrations demanding free and fair elections and the civil rights that define democracies. After Assad had unleashed his troops and jailed terrorists upon the demonstrators, all hell broke loose and Russia decided to veto UN Security Council resolutions aiming to stop the human rights violations by the Assad regime. This veto was followed by 20 more while, until now, China and USA have issued 10 and 4 vetoes respectively, c.f. Figure 1. 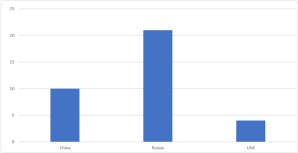 And Putin ordered his puppets in the UN to continue block resolutions about Syria. Russia has abused it veto right on Syria 15 times. The other abuses have been on Ukraine (twice) and on Georgia, Venezuela, Yemen and the genocide in Srebrenica which Russia didn’t think was a genocide, c.f. Figure 2.

Of course Russia vetoed the Security Council resolution on the illegality of the Russian annexation and mock referendum in Crimea. Since Putin  doesn’t want its military personnel to be held responsible for its crimes, the resolution calling for an International tribunal for prosecuting the perpetrators of the downing of MH17 was vetoed by Russia. The UN Security Council resolution in 2009 on a extension of a UN peacekeeping mission in Georgia was for obvious reasons also vetoed by Russia.  And Russia vetoed the resolution requesting actions against Maduro who has repeatedly attacked his own people and made his country a humanitarian disaster and also vetoed as the resolution aiming at stopping the humanitarian crisis in Yemen.

But let’s have a closer look at Russian vetoes on Syria! Six out of fifteen vetoes were used on resolutions on the use of chemical weapons, c.f. Figure 3.

“But for the tenth time regarding Syria and for the fourth time regarding chemical weapons, Russia has actively obstructed the international community’s ability to identify the perpetrators of chemical-weapon attacks. Russia has issued vetoes before in order to prevent Council action and ensure accountability in Syria. Russia has invented reasons not to support a mechanism that it helped created, because it did not like its scientific conclusions. Russia has acted to obstruct those investigations many times, but today it strikes a deep blow. Russia has killed the Organization for the Prohibition of Chemical Weapons-United Nations Joint Investigative Mechanism (JIM), which has the overwhelming support of the Council.”

from this resolution summarises the Russian abuse of its veto power well.

Among the “Other” category of Russian vetoes, here and here,  are those making sure that UN aid wouldn’t reach refugees in areas outside the Syrian regime’s control. Neither the Russian nor the Syrian regime gives a rat’s arse if those refugees starve to death.

People who commit crimes against humanity belong behind bars. 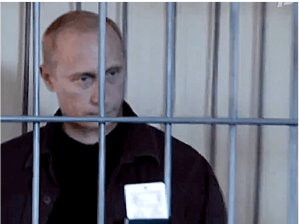