Spoiler: Governments reveal their priorities every year when they allocate their expenditures. The choice of spending on education, elderly care, health, infrastructure, social security, communications, and other areas relative to military expenditures shows the governments’ priorities.

Autocratic countries tend to spend more on military expenditures than on health. Only two countries in Europe spend relatively more on the military, Belarus and Russia. Both are autocratic regimes which oppress their populations. One of them, Russia, is engaged in war against Ukraine and supporting the butcher Assad by bombing schools and hospitals. Furthermore, Russia also engages in wars and conflicts by using private military companies such as the infamous Wagner company.

This post looks at military expenditures relative to one other expenditure item, health expenditures. The choice of governments spending more on the military than on health may be due to external or internal threats or a combination of the two. Some regimes have aggressive ambitions towards its neighbours and/or use the military and security forces to quell domestic critics. The former circumstances are used to justify high military expenditures in both autocracies and democracies. Democratic governments are less prone to use force against its critics.

Democratic governments are also less likely to attack its neighbours. This implies that military expenditures are more prioritised in autocracies and therefore possibly also higher than expenditures on health. Looking at data for 2018, this hypothesis was at least partly confirmed. Just as many autocracies spent more on health than on military as the other way around. Considerably more democracies spent relatively more on health than on the military, c.f. Figure 1. 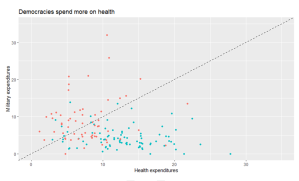 Nine countries which were categorised as democracies in 2018, spent more on the military than on healthcare. Among those were India, Nepal and Israel which border aggressive autocratic regimes. Israel is also subject to attacks from terrorist organisations inside its territory.

However, India and some other countries that democratic in 2018, have now turned autocratic according to Varieties of Democracy’s latest Democracy Report. This implies that the hypothesis that democracies spend relatively more on health would be even more supported in an analysis that includes more years and somehow distinguishes stable democracies from fragile democracies.

Many autocratic countries are found in Africa and Asia where there also are many conflicts and wars going on. No countries in the Americas or Oceania spend more on the military than on healthcare.

As member of a military alliance implies that a government is supposed or committed to spend money on the military. Military alliances carry out exercise and expect its members to be able to show solidarity if any member state of the alliance would be attacked.

NATO countries are urged to spend two percent of their GDP on the military. Only a few member states fulfil that ambition. NATO is the most hotly debated alliance in my part of the world. It is often claimed that NATO constitutes a threat to Russia. NATO critics often raise the alliance’s spending on military as very large compared to Russia. But as we all know, absolute numbers are meaningless, and the critics ignore that USA needs to spend large sums protecting countries like Japan, South Korea and Taiwan from China and North Korea. 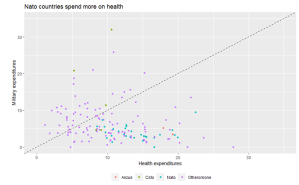 This is expected since twenty-six out of twenty-nine NATO countries in 2018 were democracies. All CSTO countries are autocracies. 2018 data on military expenditures for Tajikistan are not available. Two CSTO countries spend relatively more on health, Kazakhstan, and Kyrgyzstan. The other three; Armenia, Belarus, and Russia spend more on the military.

Most NATO countries are located in Europe, and one would therefore expect to find that most governments in this region prioritise healthcare for their citizens before the military. This is indeed the case. The Belarusian regime spends three times more on its military than on healthcare for its people. Lukashenka does not face any threats from other countries. One reason for the extreme high military expenditures is probably to use them to persecute Belarusians who demand human rights and free and fair elections. As shown above, the Russian regime also spends more on its military than on healthcare. Russia is waging a war against Ukraine and helping Assad to bomb schools and hospitals in Syria, c.f Figure 3. 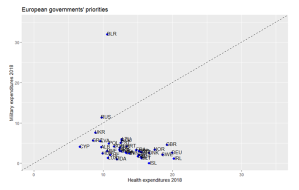 Yes, it is difficult to read all the ISO codes below the diagonal but the message comes through, only Belarus’ and Russia’s governments prioritise their military higher than their citizens.

The data above only pertain to the situation in 2018. But the priorities are stable over time. Since Putin became president, Russian military expenditures have been higher than its healthcare expenditures, while the opposite is true for USA, c.f. Figure 4. 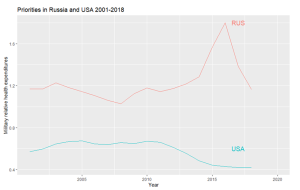 Putin’s oligarchs help him fight wars in many countries

Russia’s military expenditures are even higher than recorded by SIPRI. The Kremlin uses private military companies (PMCs) for its objectives in many countries (https://www.csis.org/analysis/russias-corporate-soldiers-global-expansion-russias-private-military-companies):

“In recent years, Moscow has expanded its overseas use of PMCs to countries such as Ukraine, Syria, Libya, Sudan, the Central African Republic, Madagascar, and Mozambique. Many of the PMCs operating in these countries, such as the Wagner Group, frequently cooperate with the Russian government—including the Kremlin, Ministry of Defense (particularly the Main Intelligence Directorate, or GRU), Foreign Intelligence Service (SVR), and Federal Security Service (FSB)—and perform a variety of combat, paramilitary, security, and intelligence tasks.”

There are also Western private companies, but the Russian appear to be much closer related to carry out foreign policy objectives of the Kremlin regime. The Kremlin use of PMCs has increased over the years. Russian PMCs are now operating on almost all continents, c.f. Figure 5. 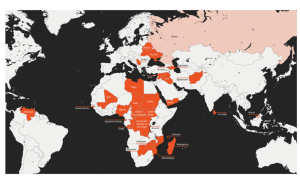 As usual, wherever the Kremlin decides to step in, human rights fly out of the window. In the Central Africa Rebublic, A United Nations report concluded, that Russian PMCs were involved in “excessive use of force, indiscriminate killings, the occupation of schools, and looting on a large scale, including of humanitarian organizations”

This is the regime that Macron and Merkel think the EU should have a dialogue with….