Few Swedish industries have been analysed by public committees as the Construction industry. The attention it gets reflects its importance for other sectors and its outputs, mainly housing.

The Construction industry has for decades been characterised by weak productivity growth and high production costs. Swedish production costs are among the highest in the EU. These and related problems have been scrutinised in many public inquiries of the Construction industry. The Swedish planning process for housing, where municipals have monopoly of the planning process, has led to fragmented housing markets with high barriers to entry. These characteristics favour the incumbent firms and make it difficult for foreign construction firms to enter the Swedish markets. More elaborated discussions of these problems can be found here, here and here. Yours truly has also been engaged in these so far inconsequential public inquiries.

As I showed here, firms that face weak competition often choose to invest smaller parts of their profits than firms that face strong competition. The former firms do not face the same urgency to make the production more efficient and renew the capital stock. The Construction industry is an example of this tendency to use profits for other purposes than investments, c.f. Figure 1.

This is problematic. Lower investments lead to future smaller capital stocks wihch hamper productivity growh and innovations. The problem is not limited to the Construction industry. It affects the rest of the economy.

Stagnating productivity growth in one industry hampers the whole economy.

Growth in GDP per capita has slowed down since the turn of the Millennium. There is a vast literature debating these phenomena which has been coined” secular stagnation”. One thing that is often overlooked, is that the lower growth can partly be explained by higher incomes and changing patterns of consumption. This hypothesis is credibly argued by Kurt Vollrath in his book and on his blog.

The larger a stagnating industry is…

Consumption of services occupy larger pies of total incomes as it increases. The same applies for housing. This is one reason to the Construction industry’s (F) increasing share of the economy over time, c.f. Table 1.

The relatively lower productivity growth in the Construction industry reinforces this process. A relatively lower productivity growth translates into a higher price relative to the other industries’ prices. The different industries’ shares in the total economy are calculated in current prices. A higher relative price for the Construction industry’s products there increases its share in the economy.

…and the weaker its growth…

The Construction industry’s productivity growth has been weak for decades. Not only compared to the Manufacturing industry, but also compared to other industries. The annual average growth of value added per hour only amounted to 0.3 percent between 1995 and 2015, c.f. Figure 1. 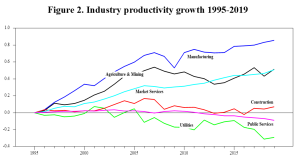 Source: Eurostat. Note: all series are expressed as logarithms of an index which equalled 1.0  in 1995. Since the y-axis is expressed in logarithmic units, the slopes of the series are growth rates. An increase by 0.1 is an increase by 100*(exp(0.1)-1).

…the larger is its impact on total growth

This does not mean that the Construction industry is useless. On the contrary, it products are highly valued by the rest of the economy. It produces both infrastructure and housing. But its low productivity growth restrains our future welfare.

Is it possible for the Construction industry to increase its productivity growth? Optimistic people put their trust in the proposals for simplifications of the building process and removals of entry barriers put forward by heaps of public inquiries.