Spoiler: putin wants us to believe that the sanctions on his death machine don’t work or are hurting us more than him. A recent analysis of sanctions show that sanctions do work! And recent data show that the russian industries are having severe problems producing new weapons.

The sanctions are hurting russia. russian gdp is expected to decline by at least 8 percent this year. The sanctions have caused russian imports to collapse in recent months. So much that the kremlin has banned the publication of trade statistics. Thus, the sanctions work and are hurting the little person’s death machine.

The negative effects of sanctions on the sanctioned country over time is analysed by a recent study. Usingthe new edition of the Global Sanctions Database, Kwon et. al. show that on average, an additional sanction decreases real GDP per capita in targeted countries by 0.39 percent.

russian GDP and imports are collapsing

putin, who lies about everything, tries to convince us that the sanctions are hurting us more than russia. Bullshit. The russian GDP is expected to decline by between 8 and 15 percent this year according to different forecasts from international organisations and central banks including the Bank of Finland:

“The broader impacts from Russia’s invasion of Ukraine in late February have gradually emerged throughout the Russian economy. High inflation erodes Russian purchasing power and depresses consumption. While military production appears to have supported industrial output, most branches are struggling. The preliminary estimate from Russia’s economic development ministry suggests that May GDP shrank by 4 % y-o-y. The June survey of Consensus Economics found that the average of Russian GDP forecasts sees a GDP contraction of 8 % this year and 2 % next year.”

The military production mentioned above is also facing problems due to its import dependence. And imports have collapsed

“Western sanctions on Russia, combined with the voluntary decisions by international corporations to exit the Russian market and difficulties such as financing foreign trade transactions have caused Russia’s imports to collapse in recent months. Russian Customs has ceased to publish foreign trade figures, so the changes in Russian imports must be deduced from the export data of Russia’s trading partners.

The statistical data of Russia’s trading partners reveal that exports to Russia (i.e. Russia’s imports) plunged in the months after the invasion of Ukraine. Notably, exports to Russia also declined among countries not sanctioning Russia, including China and Vietnam. Taiwan and South Korea, major suppliers of semiconductors, have seen a dramatic drop in their exports to Russia that has also caused production problems in Russia. In particular, Russian industries that rely heavily on imported components (e.g. car and home appliance manufacturers) have been struggling.”

The drop in imports from non-sanctioning countries shows that also secondary sanctions are hurting russian industries. Here’s a nice thread by Joseph Politano detailing the effects of sanctions on russian industrial production. He cited russian official statistics. And here’s an article by Pavel Luzin analysing how the lack of imported components severely reduces the production capacities of russian military production.

And as I showed here, especially in Figure 4, russian industries are very reliant on imports for their production. 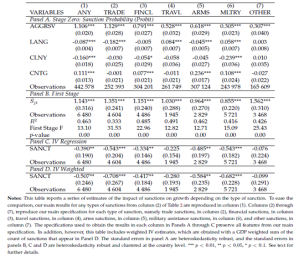 Source: Kwon et. al. (2022). https://www.cesifo.org/en/publikationen/2022/working-paper/do-sanctions-affect-growth. Note: The full specification of the regression equations and definitions of the variables are available in Kwon et. al.

These results refer to what Kwon et. al. contemporaneous GDP per capita growth. They estimate this in equations with log-level specifications of the variables. Widening the time horizon, and using log-difference specifications of the variables, they find that the effects of sanctions decrease and vanish given after some six to eight years. Thus, if sanctions are lifted in 2023, GDP per capita growth in the sanctioned country will ’m personally not convinced by this. I’m a bit sceptical. I think there will be permanent or at least persistent effects for a long period of time. These effects on GDP per capita growth will be felt through the effects on physical capital and a less efficient allocation of resources across industries.

Anyway, the analyses by Kwon et.al. have some very important implications for sanctions on russia. To begin with, sanctions must keep coming and reman in place until Ukraine has regained its territories and 1991 borders. Cease-fires or frozen conflicts can never be allowed. Given long enough time, putin will come back and try to annihilate Ukraine and other countries which he considers to be russian.

Further, heads of states and governments publicly commit to increase the sanctions and not to lift them until the last russian soldier has crossed Ukraine’s 1991 borders back to russia. The words of heads of states and governments must show up in concrete actions and policies. The short-run priority is to help Ukraine repel the russian forces. To help Ukraine regain control of its 1991 borders, more needs to be done. This requires a large scale and long-term production of arms and ammunitions for Ukraine. To avoid that Germany, Israel or Switzerland block re-exports to Ukraine due to licences, a fund can be created for Ukraine to use to place orders directly form defence industries. There are a lot of initiatives already ongoing with the aim to help Ukraine in the longer term so I might be kicking in a few open doors here due to my ignorance.

But the above is not enough. russia is also waging an information war blaming the West’s sanctions for the emerging food crisis. It is well known that russia spreads disinformation to other countries.

Fighting the information war against russia in countries that are mostly affected by the food crisis is not enough. These countries must be helped to fight the food crisis. The best and fastest way to help them is through trade. Abolition of tariffs or quotas or at least wide encompassing Free Trade Agreements with these countries should be implemented. This would also help consumers in our countries to cope better with the increasing inflation.