Spoiler: More and more countries sanction exports to Russia which creates problems  for the Russian military industry complex. Russia must therefore to a higher extent than before rely on countries that is not on the Kremlin’s list of “unfriendly countries”. China is not on that list. Putin wants to replace imports from sanctioning countries by imports from China.

However, parts of the Chinese value-added shares of Russian final demand for Computers & Electronics and Machinery origin in countries that sanction Russia. Imposing secondary sanctions that prevent China from using parts and components from sanctioning countries will make it more difficult for Putin to feed his death machine.

Sanctions against the Russian industries are beginning to bite. There are already reports that Russian production of the tanks T-72, T-90 and T14 have stopped due to lack of imported components. Production of a new airborne early warning & control aircraft has stopped due to sanctions on exports of electronic components to Russia. Also, Russian production of air defence systems including anti-aircraft missile systems have run into problems of the same kinds.

The Russian industry relies heavily on foreign products for its production.

And Russia is having severe problems producing that stuff itself as shown by Kamil Galeev in this Twitter thread. That is also one of the key insights in Noah Smith’s and Brad De Long’s interview with him in their podcast.

I wrote about the problems in the low-tech Russian economy here and here. This inability to produce advanced products make the Russian economy vulnerable to decreasing imports of foreign parts. 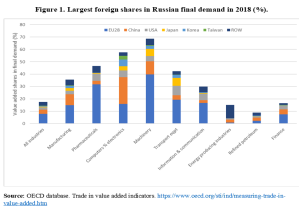 Chinese value added of Russian final demand for Machinery was also relatively large 10%. So, one would think that more Chinese exports would compensate for sanctioning countries’ exports of at least Computers & Electronics. It is however not that simple. Chinese industries need to source parts and components from other countries to produce its exports destined to Russia. That means that part of the value added in those exports are created elsewhere, for example in industries located in the Kremlin’s list of unfriendly countries.

Can Putin use imports from China to prevent starving of his death machine?

By using the OECD indicator Origin of value-added in gross imports, it is possible to show how much of Russian imports of products produced by Computers & Electronics and Machinery industries that originate from outside of China. Decomposing the Chinese value-added shares in Russian final demand for Computers & Electronics and Machinery shows that countries that sanction exports to Russia account for almost 20% and 10% respectively of the Chinese value-added shares of Russian final demand for these goods, c.f. Figure 2.

If the USA, EU, and other countries put pressure on China, they may have already as far as I know, to not use their parts and components in Chinese exports to Russia, this is another hard blow to Putin’s death machine.

Even if “unfriendly countries” should or could prevent China from using their products, China still has a lot to offer to Kremlin’s death machine. But quantity is not all that matters. Quality matters very much, especially for complex machinery like anti-aircraft missile systems and tanks.

It is not easy to compare quality of products from different countries. as many economic analyses show. A crude way of looking at this is to see look at the share of value-added in gross output. Firms create value-added to the inputs they purchase from suppliers by using the inputs in a new and improved product. The value-added creation differs from industry to industry and across firms in industries. The more complex and advanced products the firm sells to the next firm in the value chain or the the final consumer, the higher is the value-added created.

Firms in Computer & Electronics’ industries are classified as high R&D-intensive while firms in Machinery are classified as medium-high R&D-intensive. This means that a lot of efforts in terms of R&D, product development and specialised services have been devoted to the production of particularly goods produced by firms in the Computer & Electronic’s industries. 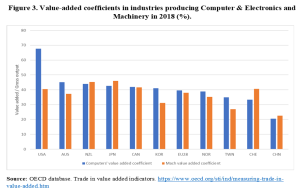 This is good news for Ukraine but bad news for Putin. Weapons systems are advanced high-tech products consisting of complex parts and components. It means that Chinese products are poor substitutes for our products.

Even though China’s ability to produce advanced and complex product has increased over time, its most complex products do not seem to be in the fields that Russia needs according to the OEC.

What I write about here are broad aggregates of industries producing a lot of individual products, parts, and components. It may very well be that China can satisfy Russia’s demand to some extent. But remember that Russia made it reliant on us for lots of stuff which Putin used to kill Ukrainains in the first place. And the Chinese industries just can’t begin to produce that stuff over-night or in months. It takes a lot of effort and time to come up with the same products that the “unfriendly countries” exported to Russia.

However, China has produced and bought a lot of weapons and weapon systems themselves. The CCP can therefore supply Putin’s death machine. A strong and coordinated diplomatic pressure on China spelling out the consequences for exports to Putin’s death machine may prevent this.

But just in case: