Spoiler: Kremlin lies through its teeth. It lies to the Russian people. It lies to foreigners. It has been going on for so long now that nobody believes it. The Russian “foreign minister” Lavrov has even said that Russia has not invaded Ukraine. The latest stupidity is about American biolabs in Ukraine where pathogens should be developed and carried to Russia by migratory birds.

Only those who want to believe Kremlin, believe Kremlin. They also believe that neo-Nazis carried out a coup d’état in Ukraine and thereafter organised free and fair elections allowing a Jewish candidate to be president. These people who also tend to believe all the ludicrous conspiracy theories about MH17, that the US government is responsible for 9/11, that the American moon landings are a hoax and that the White Helmets either faked or carried out the gas attacks themselves in Syria.

Many Swedes that defend Kremlin and spread its lies are Nazis. The rest are old Commie rats who regret Soviet’s collapse and hate USA.

This is not my first post about Kremlin lying. In this post I showed how the Kremlin and other authoritarian regimes regularly lies to its own people and foreigners. Kremlin’s lies are in particular targeting Ukraine, but also Latvia and USA. A recent post() I wrote was “inspired” by one of Kremlin’s most pathetic liars, Lavrov. Lavrov thought that Russian “western partners” should repent their lies.

Russia is an Autocracy on its way to a dictatorship, or as the researchers in Varieties of Democracy, would put it a “Closed Autocracy” like North Korea. Autocratic regimes lie more frequently and about more issues than democratic governments, c.f. Figure 1.

Figure 1. Government dissemination of false information at home and abroad in 2021. 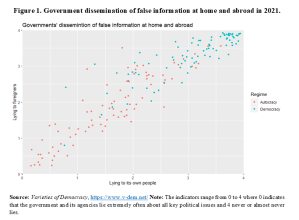 Source: Varieties of Democracy, https://www.v-dem.net/ Note: The indicators range from 0 to 4 where 0 indicates that the government and its agencies lie extremely often about all key political issues and 4 never or almost never lies.

The lower the value the more frequent a government lies about key political issues. The most frequent lying regimes are found in the bottom left corner in the graph above. There’s only one democracy there, Brazil. There are about 20 dots representing governments, below 1 for both indicators.

The Kremlin is of course among the worst liars. The top panel below reveals that Kremlin is lying more for its citizens than the North Korean regime! And its worse than Lukashenka’s regime who desperately tried to discredit Belarusian democracy activists following the rigged election.

Even though Lukashenka’s regime increased its dissemination of lies towards the outer world, Kremlin managed to lie even more to foreigners as the bottom panel shows, c.f. Figure 2.

Source: Varieties of Democracy, https://www.v-dem.net/ Note: The indicators range from 0 to 4 where 0 indicates that the government and its agencies lie extremely often about all key political issues and 4 never or almost never lies.

The never-ending story of biolabs

Moving from data to  actual examples of Kremlin’s lies, the EU vs Disinfo, is a great site if you want to keep track of Kremlin’s disinformation war. I have stolen part of the title of this post from them. The guys working there have documenting Kremlin’s lies for years. The lies about biolabs in Ukraine began when Russia’s undeclared war against Ukraine began, in 2014.

Swedes in the Kremlin disinformation war are either Nazis or Tankies

And I could go on. But others do that much better than I do, so I’ll turn to something non-Swedish readers aren’t that familiar with. The Swedish Putin-apologists. Three of them and their actions are analysed in The Kremlin’s Trojan Horses 3.0 . Unsurprisingly, many of the Swedish citizens that support Kremlin are Nazis. Other supporters are found on the far-left side of the political spectrum. Three of them stand out in this report, Tord Björk, Agneta Norberg and Anders Romelsjö.

“Tord Björk, a prominent blogger and activist with ties to the party, spoke at a Moscow conference in 2012 arranged by the Russian GONGO World Without Nazism, one of the most influential entities pushing the narrative, popular in Russian media, of escalating support for Nazism in Ukraine in the first half of the 2010s.124 Björk engages both on- and off-line with pro-Kremlin groups such as Anti-Euromaidan Sweden, and he has published articles sympathetic to Russia’s annexation of Crimea, some of them in Miljömagasinet, a magazine with close ties to the Greens”

As documented by Martin Kragh, a respected analyst of Kremlin’s disinformation activites, Tord Björk also actively participated in international activites supporting Kremlin’s imperialist Novorossija project in 2014. This post published by Björk on the Austrian discussion forum was later deleted on his request.

Björk runs the Kremlin-supporting Swedish facebook groups “Ukrainabulletinen”, and “Aktivister för Fred”, and is also one of the most prominent members of an association under the name “Folk och Fred” (People and Peace). The objective of this organisation is to push Kremlin’s narrative about the situation in Ukraine and argue against Swedish membership of NATO.

Norberg is the leading lady in “Folk och Fred”, and in other pro-Kremlin associations. She has long-standing connections with people in the Swedish Left Party which she uses to legitimise her pro-Kremlin actions. From the Kremlin’s Trojan Horses 3.0:

“Former Left Party MP NN has defended his participation in a March 2015 public meeting arranged by Agneta Norberg of the Swedish Peace Council and featuring Vladimir Kozin, head of the Russian Institute for Strategic Studies (RISS), a GONGO that experts describe as the public-relations arm of Russia’s Foreign Intelligence Service. NN took part in several events organized by Norberg, who invited Kozin to Sweden at least three times and also spoke alongside Johan Bäckman, RISS’s representative in Northern Europe. In October 2018, Bäckman was sentenced to a one year suspended sentence for harassing a journalist critical of Russia.”

Norberg is also known for her extreme hatred against the USA and regret of Soviet’s collapse. This may explain her tendency to believe even the most absurd conspiracy theories as long as they involve USA. 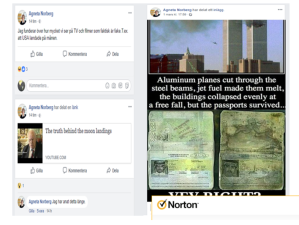 Romelsjö runs a blog, globalpolitics.se (old name jinge.se) which pushes conspiracy theories. As pointed out in Kremlin’s Trojan Horses 3.0, Romelsjö has done a lot to defend Assad’s and  Kremlin’s atrocities in Syria:

“Anders Romelsjö, editor of Jinge.se (now Globalpolitics.se), is deputy chairman of a small and little-known organization called Swedish Doctors for Human Rights, members of which frequently appear in Russian state media as ostensible experts on chemical warfare, declaring Russia free from guilt and defaming the White Helmets in Syria.”

On his blog, Romelsjö has also posted disinformation about MH17, Kremlin’s attempt to murder the Skripals, democracy activists in Belarus, Hong-Kong, defamed the Swedish publisher who’s been kidnapped by China, and also defamed Martin Kragh. Most of the posts on his blog are copied from other tin-foil hat sited, translated into Swedish and pasted.