Spoiler: In 2021, the Swedish Migration Agency refused to grant asylum to 9 500 asylum seekers. Only around 25% of the asylum applications were granted. Many asylum seekers came from countries where human rights are oppressed.

This post is inspired by this excellent article by the Belarusian journalist Alina Yanchur. Read it! Using data from the Swedish Migration Agency, she finds that shockingly few asylum applications from Belarus and other countries with no freedom are granted, c.f. Figure 1.

Figure 1. Decisions on asylum vs Freedom score by applicants’ countries. 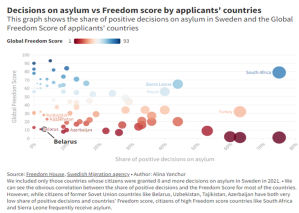 Sweden is not the only EU country which has closed its doors on persecuted Belarusians. Using Eurostat data, Alina finds that

In Figure 1, the Freedom House’s assessments of countries in terms of a total score is shown on the y-axis. Based on the assessment of political rights and civil rights, Freedom House categorises countries as Free, Partly Free or Not Free. Below I will use this categorisation and focus on Not Free countries of origin for asylum applicants.

Including only those countries whose citizens received more than eight decisions in Sweden in 2021, yields a list of 72 countries. Thirty-one of these countries are classified as Not Free according to Freedom House.

Figure 2. Percent negative asylum decisions for applicants from Not Free countries in 2021. 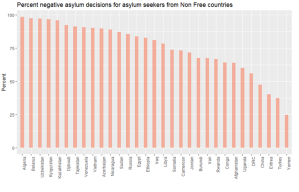 Source:  Freedom House, https://freedomhouse.org/. Swedish Migration Agency https://www.migrationsverket.se/English/Startpage.html Note: Only13 decisions concerned applicants from Djibouti. The average number of decisions amounted to 183 including Djibouti and 194 excluding Djibouti. DRC is short for the Democratic Republic of Congo.

Seven of these 17 countries are countries with a common history, the Soviet Union. Only a few countries that became free when Soviet Union dissolved managed to make a transition to democracies where citizens are guaranteed human rights. The seven countries included in Figure 2 are ruled by people who don’t care much for human rights, e.g. Lukashenka and Putin which is shown in this post. Another country with this background is Kazakhstan where around 225 people were killed and more than 10 000 jailed during demonstrations that took place recently (January 2021).

What happens to those applicants who are refused to stay? I don’t know. But I do know some people who return to their countries of origin face the risk of being tortured and killed. Reports by Amnesty International, Human Rights Watch, and other civil rights organisations bear witness about the horrible conditions in countries where human rights are violated.

These conditions can be summarised with the aid of indicators developed by Varieties of Democracy which is a project aiming at measuring democracy. The dataset includes a number of indicators that are used to illustrate the situations across countries. The one below is an indicator that shows a citizen’s physical integrity is respected. It is an average of the indicators “Freedom from political killings” and “Freedom from torture” respectively.  People who are forcedc to return to Burundi get tortured and/or killed. Also, Yeminis and Belarusians face high risks of getting killed and tortured, c.f. Figure 3.

Figure 3. Freedom of from Physical Violence in 2020 in Not Free countries of origin of asylum seekers who were refused asylum in Sweden 2021. 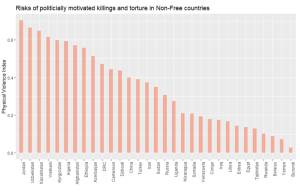 Sources: Asylum decisions: The Swedish Migration Agency https://www.migrationsverket.se/English/Startpage.html, Freedom from Physical Violence: Varieties of Democracy https://www.v-dem.net/ Note: Thefreedom from physical violence index ranges from 0 to 1, where low values indicate that the government in a country regularly use political killings and torture.

Developments in countries sometimes happen very fast which may have large effects on the asylum decision process. I wouldn’t be surprised if more people from Afghanistan receives positive asylum decisions in 2022.

Another, unfortunately not unlikely, possibility is that we soon will receive many Ukrainians fleeing from Kremlin’s forces. Putin is cruel and mad.