Spoiler: SwedishGDP per capita growth is declining. The decline is mainly due to decreasing growth of GDP per hours worked. While average hours worked, the employment rate and the labour force participation rate worked in the other direction, the contributions from these factors are small. The working-age population rate continue to decrease.

The declining growth rates of GDP per hours worked are a consequence of how patterns of consumption change when incomes increase. As incomes increase, demand shifts from goods to services. The relatively stronger demand for services leads to a reallocation of capital and labour towards these industries from goods-producing industries.

Dietrich Vollrath argues, in his book Fully Grown, that the declining growth rates in many high-income countries are signs of success. With higher incomes we tend to spend more on products that are produced by less productive industries, and we have fewer children which reduces the labour force. By decomposing GDP per capita growth, Vollrath finds that reduced growth in productivity and human capital make up for the declining GDP per capita growth rates.

Productivity growth is what is left after calculating the contributions of capital and labour to GDP per capita growth. It is a residual and therefore contains a lot of stuff that are hard to measure. Vollrath argues that the main part of the residual is explained by the American people’s choice to consume relatively more services than goods and to have smaller families. With increasing incomes, people consume an increasing share of services instead of goods and choose to have smaller families.

Vollrath analyses US growth rates. I look at Swedish growth rates to see if this also applies to Sweden. Below, I decompose GDP per capita in a similar way as I decomposed real labour earnings per capita here.

Following Hall (2017), I further decompose output per hour growth in into productivity growth and growth of the capital-output ratio.

Figure 1. Manufacturing relative price and shares of capital and labour in Sweden.

Source: Statistics Sweden. Industry shares of the capital stock are not available before 1993. I couldn’t find them at least.

The initial increase in Manufacturing industries’ share of the total capital stock is associated with the decision to abandon the fixed exchange rate 1992.

The reallocation of resources from Manufacturing towards Services changes the industrial composition of the economy. Services industries share of GDP has increased over time at the expense of Manufacturing industries. 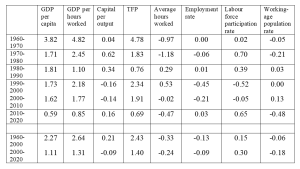 The growth of the working-age population rate did however decrease even more after the Millennium. This is also a consequence of our choices. People tend to choose to have fewer children as incomes increase. As time goes by, these choices change the demographic structure by making the population older. This means that fewer people must support more people. If this continues at the same time as growth declines, then we might have a problem.

As long as my human assistant brings food to my table, I really don’t care.

Other parts of the residual?

It seems inevitable that services industries’ share in the economy increases. Trying to prevent this is however a bad idea. The Covid crisis brought back a number of bad ideas such as Strategic Sovereignty and European Champions. Changes in industry structure are results of consumer preferences. Interventions in consumer choices affects the allocation of resources across industries that do not reflect our preferences and differ from how resources would be allocated according to their expected returns.

Some Market Services display high growth. As briefly mentioned above, that refers especially to Information and Telecommunications services. Hopefully, technological innovation such as AI, may improve growth in other services industries too. There are however more constraints to productivity in those. A robot may be able to play Smoke on the water twice as fast as Deep Purple but I’m not sure anyone would be willing to pay for that.

As mentioned above, productivity growth consists of a lot of stuff. A lot of work has been ploughed into analysing the effects of how competition affects productivity. Increased market power is believed to be bad for investments and innovation. To prevent new firms to enter the markets, there must be barriers for entry and exit. That opens the door for the role of regulations of the existing markets. Other focus on the role of inequality, decreased geographic mobility and more.

Increasing the working-age population in the short run can only be done with immigration. We are however notoriously bad at integration. It takes years for immigrants to enter our rigid labour markets. The problem is exacerbated with a severely malfunctional housing markets. So, must future generations settle with mediocre growth rates?

Maybe not. As I hinted here, “…the future is bright. Or perhaps I should write green.  See my previous post here and the references therein. Technological advances allow us to produce more with less which means that we use fewer natural resources and energy now than previously. We also need less energy and resources for transportation as many goods become smaller. And transportation methods have improved so more goods can be transported by less energy.”

Other bloggers also think that growth is about to jump back to previous levels. Read this and this if you’re interested in some techno optimism in bio-tech and health, information technologies, space, transportation and more.