Resource-rich countries can escape the trap by implementing policies that exploit new sources of sustained growth. This has not happened in Russia. The reason is that sustained growth requires growth-friendly economic and political institutions because such institutions favour the creatin of new firms but may threaten the incumbent economic and political elites’ business.

The Russian Middle-Income trap is made of Putin. It is a political economy trap which is characterised by institutions that favour the deals-based relationship between Kremlin and the oligarchs.

While this may seem counter-intuitive, it is deliberate. Putin doesn’t care about growth. He cares about sovereignty and stability.

The Russian economy is stagnating. The low growth in combination with increasing inflation has caused Russian real incomes to stagnate too. Real incomes have been declining since 2014 when sanctions were imposed on exports to Russia due to the Kremlin’s decision to invade Ukraine. Perhaps the hardest blow to Russian real incomes were due to the Russian counter sanctions banning imports of food from many countries. While that move gave some relief to Putin’s oligarchs with interests in Agriculture and Food industries, the higher prices made many ordinary Russians dig deep into their pockets to make ends meet.

According to official statistics, many Russians haven’t been able to attain a sustainable level of living standards; around 12% of the population, 18 million, are recognised as being poor. The Covid Crisis has exacerbated the situation for the Russian households and real incomes are now lower than 2010.

No growth without increasing oil prices

The Russian economy grew fast when oil prices were increasing between 2000 and 2008. After a short recovery from the Global Financial Crisis, the economy levelled out at almost zero growth rates. In comparison, the Baltic countries jumped back to former growth rates and Poland did not even stop to grow until the Covid-19 crisis. The low Russian growth in comparison to other countries has hollowed out Russian households’ living standards in comparison to households in other former Eastern bloc countries.  Only Bulgaria has a lower GDP per capita now of former Eastern European countries now in the EU, c.f. Figure 1. 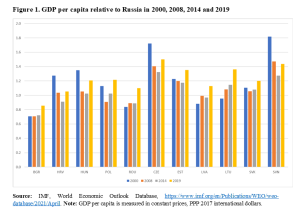 In contrast to Russia, other countries above carried out reforms to improve the functioning of their economies and judiciary systems as they joined the EU. By creating strong economic and political institutions, they managed to find sources of sustained growth in their economies. 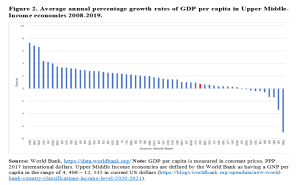 Source: World Bank, https://data.worldbank.org/ Note: GDP per capita is measured in constant prices, PPP 2017 international dollars. Upper Middle Income economies are defined by the World Bank as having a GNP per capita in the range of 4, 406 – 12, 535 in current US dollars (https://blogs.worldbank.org/opendata/new-world-bank-country-classifications-income-level-2020-2021).

Misallocation of resources yields low returns to investments in Russia

The countries that have escaped the Middle-Income trap, have find new sources of sustained growth.One such source can be exploited by improving the allocation of resources in the economy so that labour and capital freely can move from low-productive firms and sectors to firms and sectors with high productivity growth.

During the period of fast growth for the Russian economy, 2000-2008, the Russian average investment share in GDP was 19 percent. The profits in the oil industry gave incentives to increasing investments in this sector and elsewhere.

However, the increasing investments from 2009 and on have not led to higher growth. On the contrary, average annual GDP growth 2008-214 and 2014-2019 amounted to 1.3 and one percent, respectively. This took place at a higher share of investments in GDP; 23 percent. The marginal efficiency of capital (calculated as the average annual growth rate divided by the average share of investments in GDP)during the period after the oil boom, was only a tenth of the marginal efficiency of capital during the oil boom. This shows how the low returns on investments are in Russia without increasing oil prices.

Weak innovation in a low-technology economy

Another, related source of sustained growth is production and exports of high value-addedproducts. Countries that have escaped the Middle-Income trap have done so by becoming able to produce a range of advanced products that satisfy the growing demand for high-technology products.

Russia is however still as dependent of its fossil fuel exports now as when Putin became president. The Russian industry still mainly consists of low-technology industries with very few new up-coming innovative products and Russian innovation results are below expectations for its level of development. Researchers at the Observatory of Economic Complexity (ECI) who assess countries capabilities to produce advanced products find that the Russian economy’s capability to produce advanced products have not been able to keep up with other countries on the same level of development:

“During the last 20 years Russia’s economy has become relatively less complex, moving from the 30th to the 45th position in the ECI rank.”

Creating conditions for efficient resource allocation and innovations require a set of institutions that differs from those that enabled Russia to grow due to increasing oil prices. Efficient allocation of resources takes place in an environment of competition where entry and exit to the markets are supported by strong economic and political institutions. Such institutions also make innovation. Protection of property rights, independent judiciary are main ingredients in the framework for Rule of Law which characterises prosperous market economies.

It is not in Putin’s interest to create such institutions. On the contrary, that would threaten the interests of Putin’s allies. Free entry to markets and competition from new innovative firms create losers. And when the losers are among the economic and political elites with close links to the Kremlin, it is a more politically challenging problem than spurring productivity growth and increasing ordinary Russians’ welfare.

Since Putin’s oligarchs made their fortune in an institutional setting which was favourable during the oil and ram material boom, they have incentives to block any changes that threaten their positions by increased competition. They prefer the deals-based corrupt relationship between Kremlin and themselves which serves their own interests at the expense of the Russian people’s welfare.

This system which requires pervasive corruption to function is growth hostile. Upper-middle-income countries that manage to escape, combat corruption successfully before becoming high-income economies. The Kremlin doesn’t make a serious effort to combat corruption because it is the glue that holds Putin’s economic model together.

Sovereignty and stability before growth

What matters for Putin is sovereignty and stability. Paying off the Russian debt was a major success, and macro-economic policies have been focused on preventing budget deficits.

The Kremlin “industrial” policy is derived from political ambitions of stability and control. Putin has created a power vertical which is dependent on rents from the commodity trade. The distribution of rents is used to subsidize economic actors that are not economically viable, so called “rent addicts”. They support the regime in exchange for subsidies and further survival.

Another ingredient in the industrial policy amounts to limit the competition on markets where Putin’s oligarchs have major stakes. They rely on the state’s ability to limit the competition on these markets in exchange for sharing their profits with the Kremlin. This explains why the modernisation programme Medvedev launched in 2009, was torpedoed. The programme “addressed the need for diversification from the heavy reliance on the export of hydrocarbons, too much state involvement in the economy, the weak business climate for small and medium-sized businesses problems and corruption — was too much of a challenge for the various political elites and never materialized”.

The industrial policy also supports oligarchs through public procurement. That not only concerns the notorious infrastructure projects related to the Sochi Olympics that Putin handed to his oligarchs. Most of the procurement occurs through non-competitive methods. Moreover, the Russian law allows for SME quotas to be used by subsidiaries of larger firms and the unconstrained use of price advantages for domestic suppliers, both of which limit market access, efficiency, and value chain development.