Spoiler: just when you thought that they couldn’t be more bizarre, Lukashenka and Vladimir the Underpants Poisoner (Putin for short), accused USA of plotting an attempt to assassinate Lukashenka. But in a way, it makes sense. In their world, people who demand freedom and democracy are foreign agents trying to overthrow them in “colour revolutions”. If successful, the best Luka and Vladimir can hope for is an escape to a country whose government turns a blind eye to toppled corrupt killers like them.

But that is unlikely to happen. The two dictators are about to “merge” even though they deny it. The accounts of the latest meeting suggest that their union building is “progressing”. They mention a lot of areas where their co-operation is going forward. But let’s have a look at some areas they don’t mention.

Although Putin now is the strongest of the two, pictured here (https://englishrussia.com/2020/09/16/memes-around-the-meeting-of-putin-and-lukashenko/ ), he took some lessons in repression from Lukashenka when he became president. Taking control of the media, abolishing the judiciary’s independence, manipulating elections and other nefarious moves, were undertaken first by Lukashenka who has remained in power longer than Putin. Belarusian elections are normally monitored by the OSCE. But not last year. The Belarusian authorities sent out the invitation to OSCE too late for OSCE to organise the mission.

Putin became head of the FSB already in 1998. That position allowed him to put an end to the fragile upshots of democracy in Russia. Media was already heavily biased and used by Yeltsin to discredit his opponents. Moving on from the FSB to the position as prime minister in 1999, Putin was able to begin his destruction of Russia in a more systematic way. Lukashenka had shown him how to do it in Belarus and as a KGB officer, Putin also had undergone a thorough training in repression. After making sure that he had the opposition and the media under control, also Putin began to seriously manipulate the elections. Here are the OSCE’s assessments of Russian elections.

These actions show how much they despise democracy and civil liberties which characterise most of the countries which are often referred to as the “West” by Kremlin even if they are located in South-East Asia or in the Pacific Region. Liberal democracies like these are based on the idea that individuals and minorities not only have rights but also are protected from the tyranny of the state or the majority. Such rights include the right to express themselves as individuals or through independent media or organisations which they are free to create and join.

Allowing people such rights are not acceptable for the two dictators since that would threaten their regimes, c.f. Figure 1. 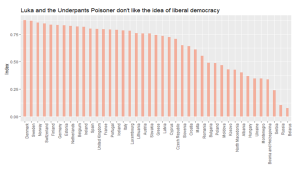 Source: Varieties of Democracyhttps://www.v-dem.net/en/ Note: The Liberal Democracy Index  ranges from 0 to 1 where 0 shows that there no civil liberties, no rule of law, a rubber stamp judiciary and no checks and balances that restrict the executive powers of the country in question.

When Putin became president, he could learn from Lukashenka’s experiences of how to deal with civil society organisations such as human rights champions, national minorities, and religious organisations.

So, When Putin  became president, he began to persecute the civil society and

The above are just a few examples of his atrocities. I haven’t updated the list since I wrote this post in December 2020. Even so, he still lags Lukashenka in repressing the Civil Society, c.f. Figure 2. 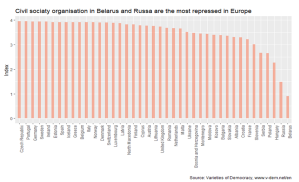 Source: Varieties of Democracyhttps://www.v-dem.net/en/ Note: The CSO repression index ranges from 0 to 4 where 0 shows that there no tolerance of civil society organisations in the country in question.

And those who violate and of the numerous laws or local regulations regarding demonstrations, gatherings or assemblies can’t rely on the judiciary system because that is not on impartial. Walking in Lukashenka’s footsteps, Putin has

Nor is this list updated since December 2020. In this respect, Putin has almost caught up with Lukashenka, c.f. Figure 3. 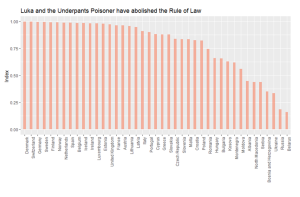 Source: Varieties of Democracyhttps://www.v-dem.net/en/ Note: The Rule of Law index ranges from 0 to 1 where 0 shows that the courts are not independent but merely acts as rubber stamping the wills of the authorities in the country in question.

And letting people speak their minds is out of the question.

The easiest way to make sure that critical people’s voices are not heard is to take control of the media and try to censor the Internet. Reporters without Frontiers summarise Putin’s efforts to shut people up, like this:

“By implementing mass monitoring of the population without just cause, the Russian government is flagrantly violating human rights such as the right to privacy or freedom of the press”, said Christian Mihr, Executive Director of Reporters Without Borders Germany, in Berlin. “International platforms such as Google, Facebook and Twitter must take a clear stand in this situation. They must not work together with Russian authorities, store users’ personal data in Russia or block certain content, which is tantamount to doing the censors’ work for them. As the host of this year’s Internet Governance Forum, the German government should do everything in its power to counter Russia’s attempts to fragment the internet into more or less separate state-controlled networks.”

“Belarus is the most dangerous country in Europe for media personnel. Critical journalists and bloggers are subjected to threats and violence and are arrested in large numbers. There are Internet cuts. Leading news websites are blocked. The print media are censored and access to information is restricted. Since the disputed presidential election in August 2020, the few independent media outlets have been hounded by police trying to prevent coverage of the huge street protests. They were already harassed by the authorities, fined and forced into exile, but they had not previously been persecuted on this scale. Raids and prosecutions are much more frequent, and the jail sentences are getting longer. Despite the risks and the increase in propaganda in the state media, courageous journalists continue to cover developments.”

So, Putin has still some work to do before the two countries have converged, c.f. Figure 4.

Figure 4. Freedom of Expression in Europe 2020.

Source: Varieties of Democracyhttps://www.v-dem.net/en/ Note: The Freedom of Expression index ranges from 0 to 1 where 0 shows that the authorities do not respect press and media freedom, the freedom of ordinary people to discuss political matters at home and in the public sphere, as well as the freedom of academic and cultural expression.

And those that don’t shut up risk their lives

Litvinenko, Navalny, Nemtsov, Politskaya and the Scripals are perhaps the most well-known victims of Putin’s killers. Navalny and the Scripals barely survived. Critics, political opponents and journalists are being killed whether on Russian or foreign territory. Putin doesn’t discriminate in that way. And as noted above, Belarus is the most dangerous country in Europe for media personnel. In this case, Lukashenka has caught up with Putin who was in the lead before the Belarus elections in 2020. Belarus and Russia have converged in political killings, c.f. Figure 5.

Figure 5. Freedom from political killings in Europe in Europe 2020.

Source: Varieties of Democracyhttps://www.v-dem.net/en/ Note: The Freedom from political killings indicator ranges from 0 to 4 where 0 shows that political killings are practiced systematically and they are typically incited and approved by top leaders of government.

…and torturing its critics.

Following the fraudulent Belarusian presidential elections last year, Lukashenka has a clear lead in torture. The response, to the peaceful demonstrations, from the regime was brutal. Illegal arrests and detainments in overcrowded cells where people were savagely attacked by the riot police. The brutality has been testified by many for instance here, here, here, and here. But the autumn elections in Russia offer Putin a chance to catch up, c.f. Figure 6.

Source: Varieties of Democracyhttps://www.v-dem.net/en/ Note: The Freedom from torture indicator ranges from 0 to 4 where 0 shows that torture is practiced systematically and is incited and approved by the leaders of government.

Tens of thousands of Belarusians have left Belarus and many more are planning to leave. Neighbouring countries have opened their doors which has also encouraged Belarusian firms to relocate. This would not have happened had Belarus chosen another way in the past. As I showed here, Belarusians would have fared better in the EU.

1 thought on “Luka and Putin, a match made in Hell.”