Spoiler: Technological progress is making green energy cheaper. This is bad news for Putin. He became president when oil prices started to rise again. Putin has done nothing to reform the economy, so the Russian is still heavily dependent on fossil fuel prices. Energy related revenues constitute more than a third of Russian budget revenues.

World market demand for fossil fuels falls as countries strive to attain zero carbon emission targets. This will translate into low future growth for the Russian economy and make it difficult for Putin to fulfil his promises about higher living standards for the Russian people.  Russian foreign policy will also have fewer instrument. The Kremlin won’t be able to use gas or oil to weaponize foreign policy when other economies become less dependent on fossil fuel.

Even if it is hard to believe now, the future is bright. Or perhaps I should write green.  See my previous post here and the references therein. Technological advances allow us to produce more with less which means that we use fewer natural resources and energy now than previously. We also need less energy and resources for transportation as many goods become smaller. And transportation methods have improved so more goods can be transported by less energy.

Contrary to what dooms-day preachers have been telling us for decades, growth and increased consumption per capita do not necessary lead to increased CO2 emissions. Even though CO2 emissions are higher in richer countries, de-coupling is possible. Looking at some middle-income and high-income countries confirm that, see figure 5 in my post.

The fast technological progress in renewable energy technologies cause the price of renewables to decline by half for means each doubling of the cumulative installed capacity. That is not happening for fossil fuels. The relative price moves in favour of renewable energy, c.f. Figure 1. 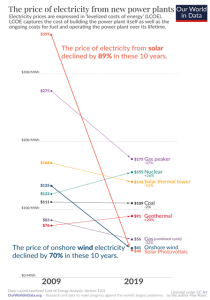 But this is not the end of the good story. In many parts of the economy, electricity needs to be stored to be used. The transportation sector, which contributes with a large share to CO2emissions, needs to store energy in batteries for its new vehicles. Battery producers are battling (oops) trying to produce smaller and lighter batteries with high storage capacity.

…and easier to store.

And they are getting there. Or will be soon according to Schmidt et. al.. According to their analyses of learning curves for electrical storage capacity, doubling of installed capacity will lower the price by half, c.f. Figure 2

Figure 2. Costs of storing electricity declines by the rate of its installation. 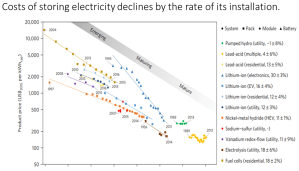 They construct experience (learning) curves for promising electrical energy storage technologies and then project future prices based on increased capacity.  This is assessed against possible minimum costs for material and production. Even though somewhat speculative, the developments are pointing in this direction.

But it may not be speculative! While taking a break from writing this post, I stumbled upon this article from Wired. Some clever guys at QuantumScape in the USA has managed to come up with a battery for electrical vehicles that solves a lot of problems inherent in today’s batteries. Its cell can be charged much faster, they last longer, store the energy longer and are much smaller than today’s batteries.

This is of course problematic for Russia as around half of its export basket is made up by fossil fuels, c.f. Figure 3.

Even though Putin rambled on about growing energy demand from Asia for the next decades, Russia’s finance ministry has started preparing for the possibility of lower budget revenues as oil demand declines sooner than expected.

The Russian economy will take a big hit

Analysts in other parts of the Kremlin also see dark clouds on the horizon. The Kremlin-funded Skolkovo Energy Center warned early December that Russia faces years of stagnation due to reduced demand for its fossil fuels. Without any significant changes of the Russian industry structure, the state’s revenues will decline, and growth may be limited to less than one percent per year for the next two decades.   The dependence on fossil fuels can also be shown by graphing oil prices and Russian GDP as below, c.f. Figure 4.

And Putin keeps investing in oil

But Putin does not seem to be convinced so Russia generates less than  1% of power from renewables. On the contrary, he wants Russia to drill for oil in the Arctic Sea.

“Putin has called the project “huge and promising,” saying earlier that it “will increase the country’s GDP as a whole, boost freight traffic along the Northern Sea Route, and, of course, strengthen Russia’s position in the Arctic.””

It is not surprising that he doesn’t give a rat’s arse about the impact on the environment. But drilling for oil in places where the costs are high at the same time as the oil price is expected to fall, will give the economists in Kremlin grey hair.

The reliance of fossil fuels problematic for any country but especially so for Russia which is exporting so much. And the contribution of CO2 doesn’t take halt at the Russian border. By taking part in trade, a country affects other countries directly or indirectly by the consumption in other countries of the good produced in Russia. This applies to all countries but especially the countries that export oil and gas. Other fossil fuel producer seem to be better than Russia to reduce the CO2 trade embedded emissions, c.f. Figure 5. 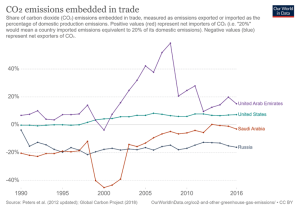 It is not surprising the Russia’s exports are dirtier than other oil-producing countries. This is a consequence of the Russian low-technology industry compared to other oil producers. The end of this post explains why the Russian economy is low-productive.

And exports of nuclear power may also turn out to be problematic. Nuclear power-generated energy has increased in price which is part of a longer-term trend. In many places building a power plant has become more expensive as the studies reviewed in Rubin et. al.

It may be too early to claim that nuclear energy has no place in the future. If the research towards nuclear fusion reactors becomes successful and/or the relative price should fall due to other technological breakthroughs and policy decisions, this may change. Russia’s low-efficient economy and malfunctioning innovation system makes it difficult to imagine that Russia should be able to be an important supplier.

The Russian economy needs reforms, but Putin won’t do it

But as I pointed out in this post, the Russian economy is dominated by low-productivity industries. The major reason for this is Putin’s lack of willingness to reform the Russian economy. Apart from in the beginning of his first presidency, Putin has not undertaken any reforms that would change the rent-dependent economy. This system creates a distorted allocation of resources, inefficiency and excessive costs of production that are borne by all actors.

According to Aleksashenko, this is a direct consequence of Putin who wants to keep a firm grip on the economy. Putin believes that any government decision, restriction, or regulation, is always beneficial and that that government planning can solve the economic problem Russia is facing. This has resulted in a poor innovation performance of the Russian economy which was emphasised by OECD (2015). The OECD analyses showed that less than 6% of Russian SMES undertook innovation activites compared to around 50% in the OECD countries. Also, the Russian government’s 2011 SME census found that only1.6% of Russian SMEs reported any expenditures devoted for R&D. The low innovation rate in Russia was also confirmed by the GEM 2012 survey that reported were few firms supplied new products on the markets and most of the firms used old technology in their production.

So, Russia will continue to fall behind advanced economies and will see poorer countries overtake it. Putin doesn’t care. He cares about his own safety. But the Russian people will continue to suffer as their living standards are been hollowed out by the dinosaur fossils in the Kremlin.

2 thoughts on “Technology is about to put an end to Putin’s fossil Czardom.”