Spoiler: After 26 years of manipulating elections, clamping down on opponents, abolishing media freedom, violating the constitution, Belarusians have had enough. Hundreds of thousands Belarusians protest against the regime’s brutal violence and torture of peaceful demonstrators. Will Belarusians gain their freedom, or will Lukashenka survive with the help of his “friend” Putin?

There have been demonstrations before, but Lukashenka has tried the patience of Belarusians too much. His claim of an 80% vote in his favour was ludicrous. And people went to the streets in at least hundreds of thousands all over Belarus.

The response from the regime was brutal. Illegal arrests and detainments in overcrowded cells where people were savagely attacked by the riot police. The brutality has been testified by many for instance here, here, here, and here.

All this evidence and all these testimonies boil down to one thing. Lukashenka doesn’t give a rat’s arse about human rights. He doesn’t want his people to enjoy freedom of speech, freedom of the media, freedom of assembly, freedom of religion. The whole state machinery is designed to prevent people from exercising their fundamental rights. The police forces, the judiciary, the media are his prolonged arms needed to control the people.

Beating up demonstrators and representatives of the opposition is an old Lukashenka tradition. 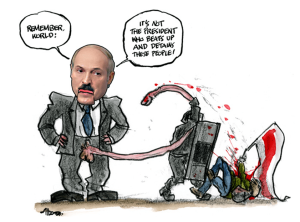 But enough is enough. Workers in factories all over Belarus have gone on strike.

And the State Television on Monday only played music and displayed empty studios. Like Ceausescu, he ordered demonstrations in his favour but that didn’t help much.

The low turnout of loyal demonstrators and booing at workplaces made him desperate. And that shows up in his rambling about Latvian and Lithuanian governments plotting to overthrow him and bring misery over the Belarusian people. And that is true if you like him believe that human rights bring nothing but misery. The Baltic countries also belonged to the evil empire aka Soviet Union. When they became free, the people in these countries expressed a clear will to join the EU, knowing that in order to become members in the EU, the governments had to implement reforms that guaranteed them the same civil rights as the incumbent members of the EU.

Countries which uphold these rights are liberal democracies, where individuals and minorities are protected against the state. In such countries, the executives face constraints, checks and balances, independent judiciaries, free press and strong rule of law, and which has become obvious in Belarus, free and fair elections.

The Baltic people now enjoy these rights (and more prosperity), which is shown in this post. The Estonians, Latvians and Lithuanians can change governments by free and fair elections, hold politicians and bureacrats accountable through the judiciary which is characterised by Rule of Law and expose corrupt behaviour and wrongdoings thanks to a free press. That is why Lukashenka hates the Baltics and turns to Putin for help. As I showed in this post, Putin has since he came to power done everything to eliminate anything resembling to the rights in a liberal democracy. c.f. Figure 1.

Figure 1. Liberal democracy in the Baltics. Autocracy in Belarus and Russia.

Source: Varieties of Democracy Project. https://www.v-dem.net/en/. Note: The indicator shows the extent to which the ideal of liberal democracy is achieved. The liberal principle of democracy emphasizes the importance of protecting individual and minority rights against the tyranny of the state and the tyranny of the majority. The liberal model takes a ~negative~ view of political power insofar as it judges the quality of democracy by the limits placed on government. This is achieved by constitutionally protected civil liberties, strong rule of law, an independent judiciary, and effective checks and balances that, together, limit the exercise of executive power. To make this a measure of liberal democracy, the index also takes the level of electoral democracy into account.

Lukashenka’s and Putin’s impacts on civil rights are obvious in the graph. Lukashenka came to power in 1994 and Putin six years after.

What will happen now? The masses of demonstrators make it difficult to use force. Many members of the police forces and military have friends and relatives which demonstrate. But there are other things to worry about. Belarus and Russia have a close security and military cooperation. They also have strong economic ties. Russia has subsidised Belarusian imports of oil for many years. The proposed union between the two countries have been postponed by a reluctant Lukashenka. But now he has asked Putin for help.  Following telephone conversations between Lukashenka and Putin about military assistance if necessary, Russian troops are on their way to Belarus. It remains to be seen if these reports are true. Lukashenka has also been rambling about NATO troops close to the Belarusian border. For the sake of the brave and peaceful Belarusians, I hope these reports are wrong.

1 thought on “Enough is enough in Belarus.”