But this time it has been more exposed. People report the true results from the voting stations. They show that Tikhanovskaya got more votes than Lukashenko. The Twitter thread from where this picture is taken is just one of the many pieces of evidence showing that Lukashenko is trying to steal the election from the Belarussian people, c.f. Figure 1. 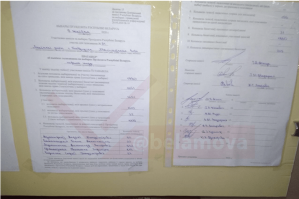 Since Lukashenko became president in 1994, he has turned elections into a farce. The democracy project at the University of Gothenburg, V-Dem, tracks and codifies different varieties of democracy in countries all over the world. The researchers in the project have, for this purpose, developed a range of indicators that allow for analysing the political situations in the countries. One of these indicators is Election Free and Fair. The indicator answers the question: “Taking all aspects of the pre-election period, election day, and the post-election process into account, would you consider this national election to be free and fair?”

The last of these situations characterise the first of presidential elections during Lukashenko’s reign. But since then it has deteriorated and no election result since 2000 has reflected the will of the Belarussian people, c.f. Figure 2.

Figure 2. No free and fair elections in Belarus.

What we witness these days may be the last days of the Lukashenko who seems to have unleashed his dogs on the Belarussian people. With the blackmail and deportation of Tikhanovskay, he has proved himself to be nothing more than a desperate dictator, worthy of nothing but contempt.

The people of Belarus deserve so much more. They deserve freedom and the right to choose their own future.

1 thought on “Another fraudulent election in Belarus”