Spoiler: This is the mother of all cluster fucks.

I hate this post. So, it’s going to be very short. I wrote it purely for my own therepeutical reasons. You should probably stop reading now. The post doesn’t really contain any meaningful information.

There are plenty of economists and wannabee-economists speculating about the effects and duration of this shit. I’m not going to add to that because this is unpredictable. If you can read Swedish, you can go to economistas.se for some intelligent reasoning.

This shit is both a demand and supply chock. A decreased demand of industry A’s products (goods and/or services) will affect other industries since industry A needs intermediate goods from other industries to produce its product. This can be illustrated with input-output (IO) tables.

The latest available Swedish IO-table refers to the situation 2016. This one allows you to calculate output multipliers for every industry. Industry A’s output multiplier shows the total effect on production in the economy due to an increased demand of one SEK for industry A’s product. 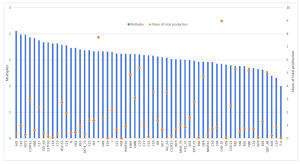 Each industry’s multiplier is larger than one since its own production is taken into account. I could of course have decomposed each industry’s total multiplier into contributions from all other industries. But that’s depressing.

I may be stupid but I’m not going to pretend to be able to show any effects of this shit on employment.

If you like, you could translate the output multipliers into employment multipliers by pre-multiplying the Leontief by a vector containing each industry’s employment-output ratio. That produces each industry’s employment multiplier which yields the amount of labour necessary to satisfy an increase of one SEK of an industry’s final demand. I’m not going to do that because this would give a false impression of precision. Also, it would only, as the figure above does, show a static view of the interdependence between an economy’s industries. Large shares of total employment are found in Retail and Wholesale (G45-G47), Construction (F), Supporting Services (N78-N82) and Hotels and Restaurants (I), c.f. Figure 2. 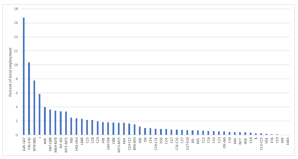 And this is where this post ends. Rather meaningless. In case you’re interested you can do the same thing for any country by using that country’s input-output table. They’re available on national statistics agencies’ web sites. Or you can go to oecd.org or wiod.org and make the calculations on multi-country input-output tables.

Such calculations will make you even more depressed than the above made me because they would give you larger multipliers as they also take into account of industries across borders. In any case, calculations like these only give a static view and we see a lot of dynamics going on now. And these calculations do not show the effects of uncertainty for consumers and firms.

But the calculations provided a bit of distraction from the shit that’s going on. Fan i helvetes djävla förbannade skit as we used to say up north.