“Project Fear” was right. The UK is more dependent on the EU than vice versa. That’s why the effects in the UK will be worse than in the EU.

As expected, Therea May’s Brexit deal was voted down in the Parliament yesterday and the risk for a “Hard Brexit” has increased. In the previous entry I showed how UK industries are integrated with EU industries as suppliers. In this entry I show how UK industries use intermediate products from EU industries. As in the previous entry, I will show the use of EU products as shares in UK exports.  (See this entry for a brief description of the methodology and data behind the calculations)

Non-EU products make up a larger share in UK total exports than EU products. Much of that is of course due to imports of energy and raw materials from a large number of countries which are included in the aggregate RoW (Rest of the World). Of the EU Member States, the largest value added shares of UK total exports are held by firms from Germany, France, the Netherlands and Italy, cf Figure 1. 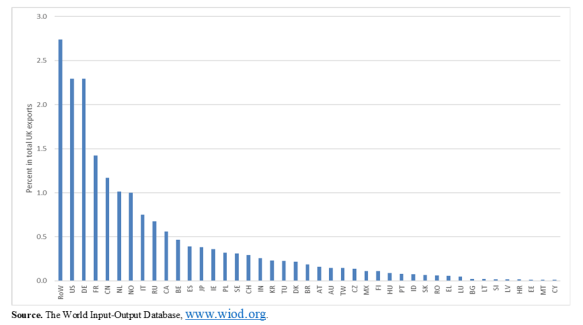 The use of foreign intermediates as reflected in foreign value added shares in UK total exports can be broken down by UK exports by industry in order to see which industries that are most dependent on foreign, including EU intermediate products. This is done in Figure 2 below where the industries have been divided into five broad categories from left to right; Manufacturing industries, Primary industries, Construction and Utilities, Market Services and finally Public Services to the right. 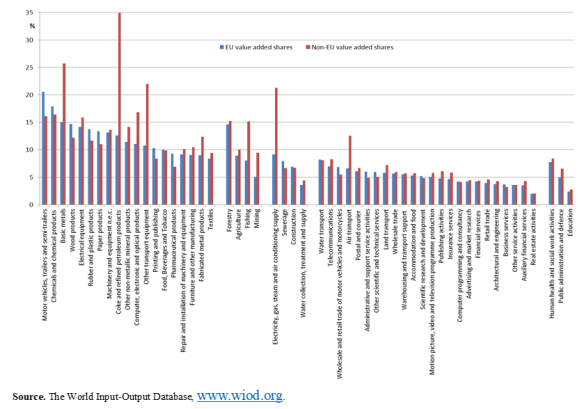 What does it mean?

Brexit means that living standards will be lower in the UK than they would have been otherwise. A hard Brexit is worse than a negotiated deal because trade will be impacted immediately. Imports will be lower and more expensive. UK firms now facing less competition in the domestic market therefore have an incentive to raise their prices and profits. At given levels of income, UK real wages will decrase leaving less to consume. The impacts will be larger the lower income people have.

In the longer run, less trade will impact on living standards through lower productivity growth. Trade is essentially a technology. Less and more expensive imports than before means that a country will produce more products itself. By doing this, resources must be taken from elsewhere. Since exports will be lower, due to decreased competitiveness on international markets, labour and capital previously devoted to produce for exports now can be used to produce for domestic consumption.

The reallocation of resources means that the economy now will produce and consume fewer products at higher costs. This means of course that the economy will grow at a lower rate and that future income levels will be lower than in a situation with larger trade.

3 thoughts on “Brexit and EU integration in UK supply chains”